Through the conversations in the previous phase, both communions affirm once again our hope to share together at the Eucharistic table one day. As the fifth phase concluded in 2018, the commission realized that after our forty years of dialogue, the commission has not sufficiently explored the Holy Sprite’s work in relation to our unity and the oneness of the Church. At the “core group” meeting in January 2020 in Indianapolis, USA, the core group proposed that the sixth phase’s topic is to be “The Ministry of the Holy Spirit” based on the Second Corinthians chapter 3. 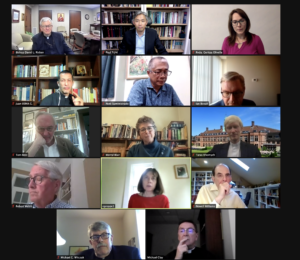 For over 25 years, Disciples and Roman Catholics have been in dialogue, looking to the hope of realizing full visible unity in Christ. The fifth phase of the dialogue has been approved to begin in 2013 on the theme, “Christians Formed and Transformed by the Eucharist.”

News Release: Catholics and Disciples of Christ Commission for Dialogue

The final report was drafted and was shared with both communions for further reviews.

The Presence of Christ in the Church with Special Reference to the Eucharist, 2009

Margaret O’Gara (University of St. Michael’s College – Toronto, Canada) The Presence of Christ in the Eucharist: A Roman Catholic Understanding

Fr. Abbot Denis Farkasfalvy (Our Lady of Dallas Abbey, Dallas, Texas) Unity in Christ: One Faith, One Baptism, and the Eucharistic Koinonia

News Release: Disciples-Catholic Dialogue Explores the Presence of Christ in the ministry of the Church

Bible Study: Merryl Blair (Churches of Christ Theological College – Mulgrave, Victoria, Australia) “According to the Order of Melchizedek”: Hebrews 7 and the Priesthood of Christ

James O. Duke (Brite Divinity School – Ft. Worth, Texas) The Priesthood of Christ in Church and Ministry: A Disciples Perspective

Aidan Nichols (Blackfriars – Cambridge, UK) The Priesthood of Christ in Church and Ministry