In 2020, The Christian Church (Disciples of Christ) in the United States and Canada and the Evangelical Lutheran Church in America (ELCA)

agreed to resume a bilateral dialogue, affirming the proposal of the ecumenical offices of both churches. Following a pre-dialogue consultation in 2003, both the Disciples of Christ and the ELCA affirmed plans to enter into dialogue seeking full communion. The first meeting took place  in April 2004 with an initial series of papers exploring a common understanding of communion and baptism, under the theme of “the Role, Place, and Power of the Sacraments and the Confessions in Shaping Our Identities as Church.” Subsequent rounds were delayed, however, due to staffing transitions and changes in leadership.

Documents from the Previous Dialogue Sessions

Following the separate affirmation of both churches to resume the bilateral dialogue, a pre-meeting was held to discuss the developments in our relationship since 2004 and the goals of resumption. Participating were Presiding Bishop Elizabeth Eaton of the ELCA; General Minister and President Terri Hord Owens; Bishop Don Kreiss, chair of the ELCA Conference of Bishops EIR Committee; Disciples historian Mark Toulouse; Kathryn Lohre, Executive for the Ecumenical and Inter-Religious Relations

& Theological Discernment; and Paul Tche, President of the Christian Unity and Interfaith Ministry. The agenda focused on building relationships, sharing the history, and exploring theological differences, including each tradition’s relationship to the ancient historical creeds and understanding of ministry.

Due to the ongoing pandemic, the first meeting will be held via Zoom. This meeting is designed to introduce the participants to one another, study the previous meetings, and envision the dialogue together.

The first official meeting was held via Zoom. The first part of the meeting was led by Dr. Toulouse and Dr. Hughes to address these questions relative to their traditions:

The second part of the meeting was planned as small group sessions. Core values and beliefs of the Disciples and ELCA were discussed. 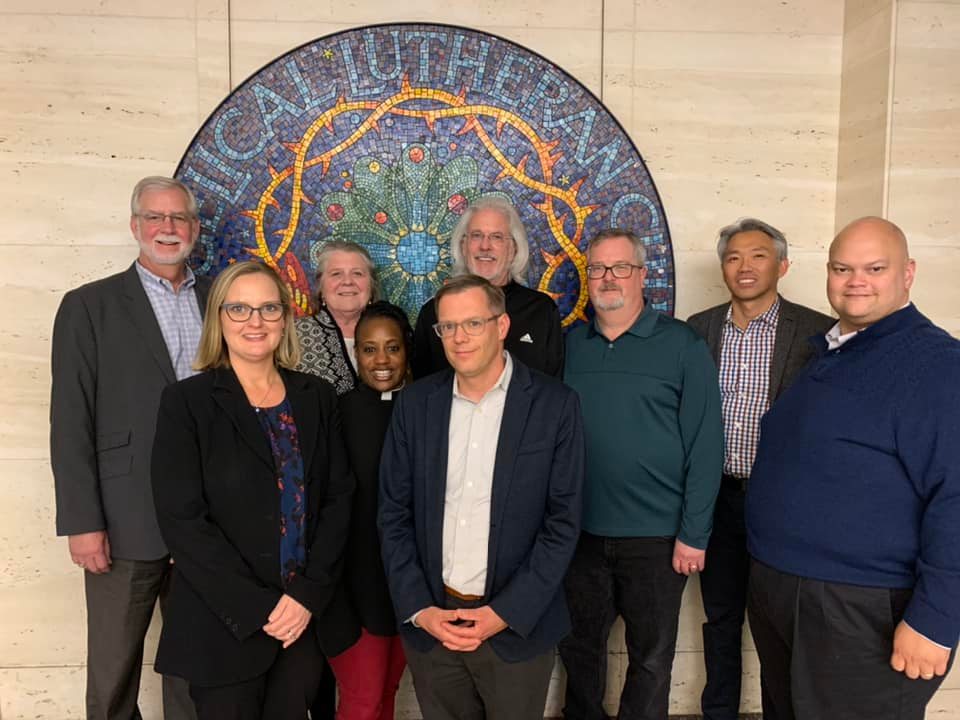 Participants arrived in time for dinner on April 28, at the Lutheran Center. This served as a time of relationship-building. After dinner, Disciples led worship in the chapel, which included the Eucharist. Rev. Richie Sanchez presided.

An opening discussion included a review of the process until now and preparation for the next day’s session. The historic nature of the gathering and the opportunity to discern the “new thing” God is doing among us (Isaiah 43) were important themes. Participants also touched upon neuralgic points between the two churches, including the creeds, Trinity, confessions, and the tension between autonomy and authority. Contextual dimensions were also noted, including the Disciples’ history as an American denomination and the ELCA’s history as a North American expression of a global Lutheran movement.

On the following day, the first case study was presented by Bishop Kurt Kusserow of the Southwestern Pennsylvania Synod, who joined by the dialogue by zoom. He shared more about the centerpiece of the case, the “Around the River Parish,” and its setting, ministries, and the people involved. (See full case study above.)

The second of two case studies was presented by Rev. Rene Martin, a Disciples pastor in the Pacific Southwest Region, and his spouse, Rev. Lara Martin, an ELCA pastor in the Pacifica Synod. They shared more about the centerpiece of their case study in cooperative ministries, “How can we be church together?”  (See full case study above, updated for the presentation.)