The Church and the Jewish People:

A Study Guide for the Christian Church (Disciples of Christ)

In its “Progress Report on Relations Between Jews and Christians” to the 1991 General Assembly of the Christian Church (Disciples of Christ), the Commission on Theology issued “A Call for Further Study.’ The Commission’s reflections on the relationships between the church and the Jewish people led it to conclude that a proper understanding of this relationship is vital to the church’s authentic self-understanding and critically important with regard to Christian behavior toward our Jewish neighbors. How we Christians understand and relate to Jews and Judaism is crucial to how we understand our own identity and to how we understand God and Jesus Christ.

Chapter 1: What Is Scripture for Jews and Christians? by Walter Harrelson

Chapter 3: Judaism and Early Christianity in the New Testament by Ronald J. Allen

Chapter 4: The Teaching and Practice of Contempt by Clark M. Williamson

Chapter 6: Judaism in the Twentieth Century by Clark M. Williamson

Chapter 7: Jewish and Christian Theology on Election, Covenant, Messiah, and the Future by Joe R. Jones

Chapter 8: The State of Israel and Jewish/Christian Relations by Walter Harrelson

Chapter 9: Signs of Hope in Jewish/Christian Relations by Michael Kinnamon

Appendix: Report from the Commission on Theology: A Statement on Relations Between Jews and Christians 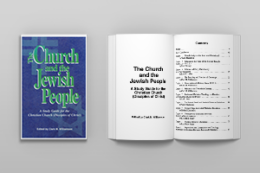