In honor of the anniversary of Nostra Aetate, 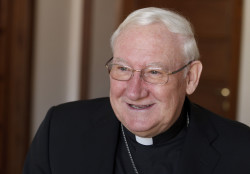 Bishop Brian Farrell is the Secretary of the Pontifical Council for Promoting Christian Unity.

Bishop Farrell previously served as Director of the Novitiate of the Legionaries of Christ in Connecticut, U.S. He was awarded a Doctorate in Theology from the Pontifical Gregorian University in 1981 and he began work in the Secretariat of State in the Vatican in October of the same year.

Former Chief Rabbi of Ireland and a past Chairman of the International Jewish Committee on Interreligious Consultations (a broad-based coalition of Jewish organizations representing world Jewry to other religions), he serves on the leadership of various international interreligious bodies.

Rabbi Rosen received a papal Knighthood in 2005 for his contribution to Jewish-Catholic reconciliation and in 2010 he was made a Commander of the British Empire by H.M. Queen Elizabeth II for his work promoting interfaith understanding and cooperation.

This site uses Akismet to reduce spam. Learn how your comment data is processed.