A Call for Peace, Justice and Reunification in the Korean Peninsula

WHEREAS, St. Paul assures us “For he is our peace; in his flesh he has made both groups into one and has broken down the dividing wall, that is, the hostility between us” (Eph. 2:14). Since Jesus Christ broke down the walls of hostility that divide God’s people, as Disciples of Christ desiring Christian unity as our Polar Star, we too are called to seek reconciliation and peace, not only here in North America but in the Korean Peninsula; and

WHEREAS, Koreans attained freedom from Japanese occupation on August 15, 1945, upon Japan’s defeat in World War II, and the Korean peninsula was subsequently divided into North and South at the 38th parallel by U.S. and Soviet troops as a military expediency, which did not lead to a unified peninsula but a war in June 1950; and the Korean War, which claimed 4 million lives and divided 10 million families, ended on July 27, 1953, with the signing of an Armistice Agreement and creation of a demilitarized zone between North and South Korea, and yet after sixty years a formal Peace Treaty has never been reached, leaving the peninsula and its people divided by fear and hostility, and subject to recurring incidents of violence; and

WHEREAS, communities and families separated by the Korean War and subsequent division between the North and South desire reunion and reconciliation before generations pass without ever seeing or knowing the fate of loved ones; and separated families have rarely been able to communicate or visit across the border, but rather have been kept distant, disconnected, and often are used as leverage in political negotiations; and

WHEREAS, 2015 marks the 70th anniversary of Korea’s liberation from Japanese occupation (1910-1945), yet the Korean people are still not free from the occupation of extensive militarization and from Cold War international politics that have been often viewed as antagonistic and intensified in recent years as North Korea has conducted nuclear weapons tests and South Korea has been the apex of a U.S. policy to “pivot” or reposition arms and forces into the Pacific; and

WHEREAS, for more than 60 years the U.S. has led sustained economic sanctions on North Korea, continues to wield wartime operational control of South Korea’s military, and has considered deploying the Terminal High Altitude Area Defense (THAAD) anti-ballistic missile system in the country to intercept missiles from North Korea, China and Russia, further threatening the peace and security of the Korean Peninsula and Northeast Asia[1]; and

WHEREAS, the Christian Church (Disciples of Christ) maintains a close partnership with the Presbyterian Church in the Republic of Korea (PROK), which is lived out through the shared ministry and fellowship of numerous Disciples members and congregations, as well as through the programmatic work of the Council on Christian Unity, the North American Pacific/Asian Disciples (NAPAD), and the Common Global Ministries of the Christian Church (Disciples of Christ) and United Church of Christ; and which together with the National Council of Churches in Korea (NCCK), the Korean Christian Federation of North Korea (KCF), and the World Council of Churches 10th Assembly meeting in 2013 in Busan, Korea, have called on the international community to advance a new era of commitment to work for peace and reunification in the Korean peninsula;

THEREFORE, BE IT RESOLVED that the 2015 General Assembly of the Christian Church (Disciples of Christ) meeting in Columbus, OH, July 18-22, 2015, faithfully joins our ecumenical partners, especially the Presbyterian Church in the Republic of Korea and the National Council of Churches in Korea, (1) in affirming the “Statement on Peace and Reunification of the Korean Peninsula” that was adopted by the 10th Assembly of the World Council of Churches[2]; (2) in supporting the communique that was issued by the WCC International Consultation on Peace, Justice, and Reconciliation on the Korean Peninsula at the Ecumenical Institute in 2014[3]; and

BE IT FURTHER RESOLVED that the General Assembly, recognizing that 2015 is the 70thanniversary of the liberation of Korea from occupation at the end of Second World War, even as the Korean peninsula remains occupied by militarization and nuclear weapons, calls upon the General Minister and President and other leaders of the Christian Church (Disciples of Christ) in the United States and Canada to challenge the U.S. and Canadian governments and international community (1) to commence a new process of peace-building across the Korean peninsula that includes a commitment by all parties to replace the Armistice Agreement of 1953 with a permanent Peace Treaty, finally bringing an end to the state of war, and (2) to express their commitment to end provocative military exercises on the peninsula, to reduce military expenditures, and to eliminate nuclear weapons on the peninsula, establishing a model for peace and demilitarization in North East Asia; and

BE IT FURTHER RESOLVED that the General Assembly calls upon our church to dedicate itself to accompany our Korean partners, the Presbyterian Church in the Republic of Korea (PROK) and the National Council of Churches in Korea (NCCK) in South Korea, and the Korean Christian Federation of North Korea (KCF), in their efforts to seek the reconciliation and restoration of families and communities long divided by conflict and hostility, so that social, spiritual and psychological healing can occur between the people of Korea; and

FINALLY, BE IT RESOLVED that the General Assembly of the Christian Church (Disciples of Christ) in the US and Canada continue to support ecumenical engagements toward peace and reconciliation of the Korean Peninsula. These actions include promoting the campaign to finally replace the Armistice Agreement of 1953 with a Peace Treaty, joining with Christians around the globe in recognizing and providing worship resources through Global Ministries for the Sunday before August 15, Korean Independence Day, as the “Sunday of Prayer for the Peaceful Reunification of the Korean Peninsula,” and actively raising these initiatives at the National Council of Churches and Canadian Council of Churches for immediate action and engagement.

[1] Gen. Curtis Scaparrotti, the commander of United States Forces Korea (USFK) confirmed the fact that there was consideration to deploy the THAAD system by US military authorities. For further information, cf. a CBS News article on June 3, 2014 at http://www.cbsnews.com/news/u-s-proposes-advanced-missile-defense-system-in-south-korea; National Council of Churches in Korea issued its public statement to object any attempt to deploy the THAAD in South Korea on September 4th, 2014. (http://www.kncc.or.kr/)

[2] cf. WCC Statement on Peace and Reunification of the Korean Peninsula, November 8, 2013,http://bit.ly/1FDMKYT 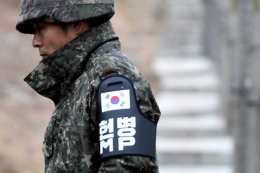