Ecumenism for Paul A. Crow, Jr., is a central academic interest, a passion of the heart, and an object of lifelong commitment. He came to the presidency after two positions of preparation: teaching history at Lexington Theological Seminary (1961-1968) and service as the general secretary of the Consultation on Church Union (1968-1974). He led the Council with distinction for twenty-five years, now a quarter of its history, from 1974-1999. He brought Disciples to a place of high visibility in the global ecumenical endeavor. His leadership included significant ecumenical advance for Disciples in establishing the full partnership of Disciples with the United Church of Christ, the creation of the Peter Ainslie III Lectures on Christian Unity and the Joe A. and Nancy Vaughn Stalcup Lectures on Christian Unity, and the initiation and development of the International Commission for Dialogue between the Disciples of Christ and the Roman Catholic Church.
Paul A. Crow, Jr., President of the Council on Christian Unity, 1974-1999

The Vision of Christian Unity: A Life Given to the Ecumenical Quest

This book is a labor of love by some thirty persons in honor of the life and witness of Dr. Paul A. Crow, Jr. Included in this volume are essays by leading ecumenical leaders from around the world along with personal tributes by key international figures from the religious and academic fields.

© Copyright 1997 by the Council on Christian Unity
All rights reserved. No part of this publication may be reproduced, stored in a retrieval system, or transmitted in any form or by any means, electronic, mechanical, photocopying, recording, or otherwise, without the prior permission of the copyright owner. 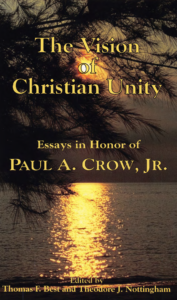 The Rev. Dr. Paul A. Crow, Jr ., is a distinguished leader, scholar, and statesman in the worldwide Ecumenical Movement. Over the past thirty-five years, he has given formative leadership to all expressions of the movement toward Christin Unity. Traveling to over 90 countries and all six continents, he enjoyed friendships with countless leaders in other traditions: Protestants, Roman Catholic, Orthodox (Eastern and Oriental), Pentecostal, and Conservative Evangelicals.

He was born in Birmingham, Alabama, on November 17, 1931. At age two he and his parents – Paul and Beulah Crow – moved t0 Lanett, Alabama. a small textile town in East Alabama. His sense of the church ecumenical began as a youth when he served as president of the Disciples International Christian Youth Fellowship and participated in the United Christian Youth Movement, coordinated by the Youth Department of the National Council of Churches.

His academic journey brought him degrees from the University of Alabama (B.S. Chemistry), Lexington Theological Se.mi.nary(B .D.), and Hartford Seminary Foundation (S.T.M., Ph.D.). His theses and dissertation were on ecumenical subjects: the nature of Christian unity, the Church of South India, and the concept of unity in diversity in the Faith and Order Movement. Postdoctoral studies took him to Oxford University, the Ecumenical Institute Bossey, and the University of Geneva. He has received five honorary doctorates including Phillips University, Bethany College, Lynchburg College, and Yale University.

Within the National Council of Churches of Christ in the U.S.A., Dr. Crow served on the General Board/Assembly and Executive Committee (1974- 1998) and was chairperson of the Panel on the Nature of Ecumenical Commitment chat redefined the nature of the NCCC.

In the arena of Church unity, be has helped shape and direct the nine church Consultation on Church Union serving as the first General Secretary (1968- 1974) and then as a member of the Executive Committee (1974 ~ 1998). The Ecumenical Partnership between the Christian Church (Disciples of Christ) and the United Church of Christ developed from the initiative of Dr. Crow and Dr. Robert V. Moss, then president of the UCC. Dr. Crow has worked with united churches around the world and participated in five of the six consultations of United and Uniting Churches.

He perceived the importance of international bilateral dialogues in recent decades and brought Disciples into theological conversation toward unity with the Roman Catholic Church (1977 -), the World Alliance of Reformed Church (1987 -), the Russian Orthodox Church (1987 -), and the Evangelical Lutheran Church in Finland (1996 -).

Dr. Crow’s literary life has produced six books, and over 300 articles and chapters. In 1997, he was presented with a book of essay and tributes, A Vision of Christian Unity, written by leading international ecumenical theologians and Church leaders. Since 1974, he has served as Editor of MidStream, a widely heralded journal of ecumenism.

Among the church leaders of this century, Paul Crow has given broad, distinguished, and passionate leadership in the Ecumenical Movement. The unity of Christ’s Church has been his “polar star,”as it is for his tradition. Because of his leadership, the Disciples have been unusually visible and have exercised an influence in the worldwide Ecumenical Movement far beyond their comparatively small number of believers.